In part 1 of the series, we compared today’s population with that of Earth before the Industrial Revolution, call it 1750. Assuming farmers back then were as productive as possible, the food supply back then supported a population about 11% of what it is today. We rounded this off as If civilization collapsed, there’s a 90% chance you’d starve to death.

But let’s say you’re in the 10% of human beings who survived the civilizational collapse. You’d live a joyous life, back to the land, right? Wrong.

There’s a 90% chance that, if you survived, you’d be a subsistence farmer

France in 1750 was one of the most prosperous places on Earth. Yet the best estimates of French society of that day are that about 98% were commoners, with the vast majority of them being peasants. Not all peasants were serfs, tied to a nobleman’s land, but even being a free peasant working a farm one owned himself in 1750 would have been a lifestyle you would hate. 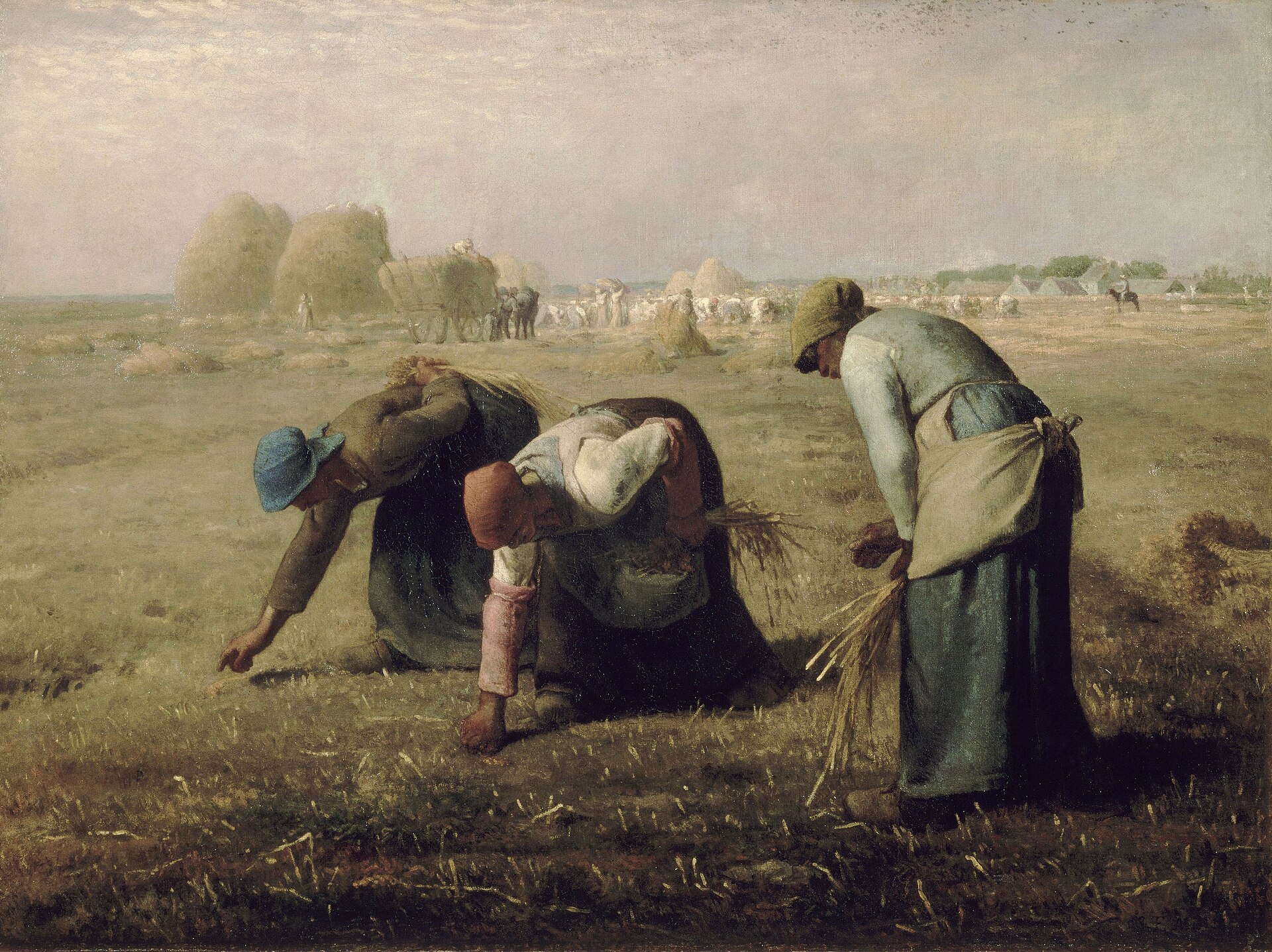 Millet’s The Gleaners 1857
Yes, I know, The Biggest Little Farm shows how farmers live “life in perfect harmony with nature”. So says a big city film critic, and how could they be wrong?

Easily. I lived on a farm part of my childhood. Do you want to know the specifics of being a dairy farmer? “Living in perfect harmony with nature?”

Get up at 5 am. Guide the cows into the milking barn. Hook up their udders to vacuum pumps and store the raw milk in a giant thermos. Finish milking them by 7 am. Spend the day maintaining things on the farm, going into town for supplies, or working in the city for a steady wage and benefits. Then, at 5 pm, milk the cows again. Yup, twice a day, 365 days a year. Stop milking the cows and the cows will stop giving milk.

Some days, you have extra herd management to do. The cows will only give milk if they’ve given birth to a calf. Cows like to calve in the depths of a Midwestern winter. And they like to calve in safety, i.e., in the woods at the back of the 300 acre farm. Hopefully you can find the calf before it freezes to death or catches a serious infection.

But a cow that gives milk to its calf doesn’t give milk to the farmer. So you take the calf from the cow at a very young age, pen the calf up, and feed it formula.

Don’t forget, half the calves are male, and give no milk. So every spring, you castrate most male calves and fatten them up for the slaughterhouse. Watch the futures prices to guess when is the best time to sell them for 60 cents a pound, maybe $400 each. Maybe you’ve made a profit. Maybe.

And remember, this is in the late 20th century! Without electricity, you don’t have vacuum pumps. You squeeze cow udders by hand. Far slower than using a pump. Be optimistic and call it four hours instead of two. Or in other words, in 1750, you’d spend a full working day just getting milk out of cows.

And then what do you do with it? In 1980, a tanker truck drives to the farm and pulls milk from the giant thermos. 1750 lacked tanker trucks. And giant thermoses. So you have to either consume/sell it immediately or convert it into a long-term storable product, namely butter or cheese. Hope your hands didn’t get tired squeezing cow udders, because now you have to crank a butter churn for hours.

Hey, on the bright side, if you can sit at a desk and process words, you can probably sit on a stool and squeeze cow udders all day.

I can still hear the objections. “My MFA in Creative Writing and my carefully curated taste in political candidates proves that I’m suited for a higher state than mere farming. After all, 2% of French people in 1750 were priests or nobles, and many commoners lived well, too.”

Sure, let’s say the 1-in-100 chance hits, and you both survive the famine when high technology collapses and you find yourself a member of the upper classes in the new, low-tech order. You’d still be worse off as a 1750 aristocrat than a middle class citizen of Western Civilization in 2020. I’ll explain why in my next post.